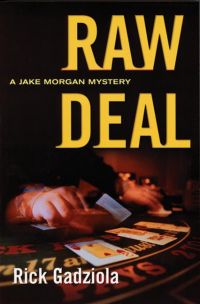 Jake Morgan loves Las Vegas. He's a 33-year-old ex-cop from Boston who will wager on anything - as long as his money holds out. Having run into trouble in Beantown, for the past year he's been eking out a living as a blackjack dealer at the posh Oasis Hotel & Casino. Christian Valentine, the star attraction of The Sultan's Tent, tells Jake that he's being blackmailed; because of his star status, he doesn't want the police involved. He knows Jake's history, and he wants his private help. Jake discovers an army of Valentine-haters out there. But when he goes to confront Valentine himself, the performer isn't talking. He's facedown in a Jacuzzi with an arrow stuck in his back. The media have a field day with the murder, and Jake quietly keeps up his investigation. Among the suspects are Valentine's wife (who would benefit from the insurance policy), his stage manager, the showroom maitre d', Big Julius Contini (the owner of the Oasis), and finally Johnny Ventura - the young singer who will replace Christian Valentine after years of waiting in the wings. Raw Deal is the first book in the Jake Morgan mystery series. Rick Gadziola writes with a light touch, spicing the crime quest with humour.