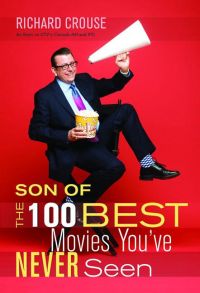 Fans of offbeat cinema, discriminating renters and collectors, and movie buffs will drool over this checklist of the best overlooked and underappreciated films of the last 100 years. In Son of the 100 Best Movies You've Never Seen, Richard Crouse, Canada AM film critic and host of television's award-winning Reel to Real, presents a follow-up to his 2003 book with another 100 of his favorite films.

Titles range from the obscure, like 1912's The Cameraman's Revenge, to El Topo's unusual existential remake of the classic western, and little-seen classics like The Killing. Each essay features a detailed description of plot, notable trivia tidbits, critical reviews, and interviews with actors and filmmakers. Featured interviews include Billy Bob Thornton on an inspirational movie about a man with his head in the clouds, Francis Ford Coppola on One from the Heart, and Mario Van Peebles on playing his own father in Badasssss!

Sidebars feature quirky details, including legal disclaimers and memorable quotes, along with movie picks from A-list actors and directors.