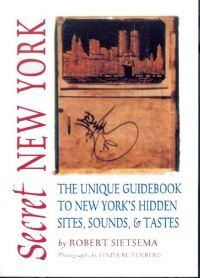 On other books in the Secret Series: "This jewel of a book [Secret Toronto] with amazing photos by Linda Rutenberg, aims to lead the inquisitive astray" -- NOW Magazine

"Secret Toronto guides locals and visitors to the unusual, frivolous, and downright quirky attractions of the city. No pre-planned tours or planned itineraries here." -- Globe and Mail

There are dozens of published guides to New York City, nearly all of them covering the same well-trodden territory of pricey restaurants, major hotels, and shopping at pick-your-pocket prices. Here's a tourist guide with a difference. New York insider and Village Voice columnist Robert Sietsema has assembled a topic-focussed book:

* "Secret Metrocard," for example, explains how to get the most bang for your buck from this new transit card. It tells you how to turn a free transfer into a free round trip, and how to exploit the 18-minute secret grace period.

* "Secret American Indians" tells you where to find a hidden Indian cave right on the island of Manhattan.

* "Secret Cheap Eats" reveals where to get a delicious, multi-course meal for less than five dollars.

There are chapters on how to plug into the Japanese underground, where to find the best bagel and egg cream, where to find the rock clubs that the hipsters frequent, where to rent a bicycle to tour the city, and where to ride it so you don't get run over. Secret New Yorkgives you the inside information that natives use to get by in -- and even over -- this challenging metropolis.