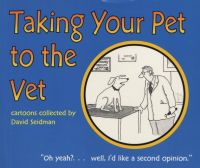 Taking Your Pet to the Vet

Everyone, sooner or later, gets a pet. And inevitably, they have to take that pet to a veterinarian. That's why cartoonists from both daily newspapers and the most sophisticated magazines create some of their best work when they draw on the experience of forcing a supposedly domesticated animal to go to the doctor. Garfield. Peanuts. The New Yorker. The Far Side. These are just a few of the sources for Taking Your Pet to the Vet, a collection of cartoons from more than 200 strips, panels, and other drawings from the best cartoonists in the world. The book will include: The eerie art of Playboy cartoonist Gahan Wilson, who puts a werewolf in a vet's waiting room.

The homey newspaper comic strips of For Better or For Worse's Lynn Johnston, featuring the effects of a huge sheepdog on a small family. Comedy from B. Kliban, whose cat books and calendars have been an international favourite. From a Hindi vet who applies an unconventional method to pull an elephant's tooth to a dog free-associating on a psychiatrist's couch, from a shark's day at the dentist to a snake all tied up in knots, this book delivers a wide assortment of laughs for any pet owner.