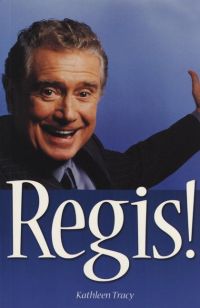 The first biography of the host of  Who Wants to Be a Millionaire? and Live! With Regis - he's the most-watched man on American television. Regis Philbin is short, curmudgeonly, and pure schmaltz. Yet he commands so much celebrity attention that he launched his own award-winning fashion line.

The dapper host of Who Wants to Be a Millionaire?, the most popular game show in television history, and Live! With Regis  is admired by an incredibly diverse fan base: old-timers love his cantankerous outlook on life; middle-aged men want to be him and middle-aged women want to marry him; younger viewers love his hip-to-be-square attitude. Go, Reege, go!

This biography looks at Philbin's personal and professional life. During his slow rise through the television ranks, he got little respect and recognition for his talk show innovations. Even his name was the fodder of jokes. It was his on-air chemistry with Kathie Lee Gifford on their morning show Live!  that catapulted them both to mega-stardom.

Scandal, of course, played a huge part in this. Viewers developed a love-to-loathe-her relationship with the screechy Gifford, especially after her sweatshop imbroglio and the revelation of her husband's embarrassing affair with a stewardess. And there was Philbin's own tawdry affair with a much younger bunny who, ahem, he never had intercourse with...but they did do everything else. Oh, Reege!

Regis! The Unauthorized Biography looks at all of this in detail, including Philbin's bittersweet relationships with his physically challenged son, Danny, and his daughter, Amy, as she struggled with drug addiction. Finally, Tracy recounts the improbable events that led to his becoming the host of Who Wants to Be a Millionaire?