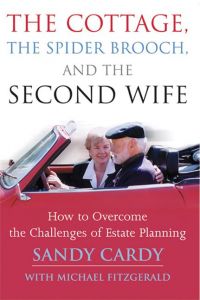 Cottage, the Spider Brooch, and the Second Wife, The

This is the story of Alfred Hilroy, a recently widowed, 68-year-old man who believes that estate and money matters should be kept private. It is also the story of Alfred's three grown children, Bev, Michael, and Judy, who love their father dearly but worry that he is going to squander away his retirement savings - and their inheritance. Alfred believes his affairs are in order. He has part-time work at the pharmacy he co-owns and runs, reasonably good health, and a modest but steady amount of retirement income. However, he misses his late wife terribly and does not look forward to navigating through old age alone. Then "The Bolt" hits. Mary Beth Cain, twenty-five years Alfred's junior, is an athletic, confident, outgoing woman who knows what she wants. Within weeks there is talk of a future life together. Bev, Michael, and Judy are soon swept up into a sea of conflicting emotions as their new step-mother moves into - and redecorates - the beloved Hilroy home, appears at Alfred's birthday party wearing their late mother's spider brooch, and vacations with the family at the cottage. Will Alfred leave everything to this newcomer to the family? Will cherished family belongings suddenly disappear? The Hilroys' struggles are becoming more and more common as baby boomers confront their parents', and their own, mortality. As Bev, Michael, and Judy screw up their courage and begin discussions with their father about his estate, we learn about, Powers of Attorney, capital gains tax, probating a will, US estate and gift tax, trusts, joint ownership, cottage inheritances, communicating with aging people, and more - all in an intriguing, suspenseful, and ultimately liberating story.