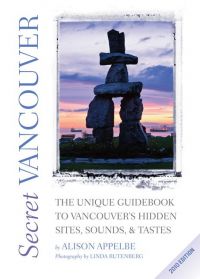 Revised and expanded for the 2010 Olympics.

It's been said that Vancouver is a little superficial. Observers point to her great bones, pretty face, and fine outerwear of mountains, gardens, trees and water. But there's more to this Pacific coast city than good looks.

Vancouver has character, warmth, brains and style - even some spunk. Consider funky, former-industrial Yaletown, where restaurants and tasting bars serve locally sourced and seasonal cuisine in an ultra-chic atmosphere, at prices so modest they'll shock the knowing American. Or visit the dramatic Museum of Anthropology, with its historic aboriginal

This revised and expanded edition of Secret Vancouver, just in time for the Vancouver 2010 Olympics, includes even more secret sites, restaurants, bars, patios, bookstores, yoga classes, and other off-the-beaten-path finds. Where can you get good wireless internet? Where can you relax with a drink and the best ocean views?

Whether you are a long-time local or casual vacationer, let Secret Vancouver introduce you to the sights, sensations and stories you'd never think to look for.