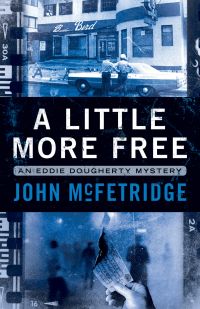 “Like [Elmore] Leonard, McFetridge is able to convincingly portray flawed figures on both sides of the law.” — Publishers Weekly

Montreal, Labour Day weekend, 1972. The city is getting ready to host the first game in the legendary Summit Series between Canada and the USSR. Three men set fire to a nightclub and Constable Eddie Dougherty witnesses the deaths of 37 people. The Museum of Fine Arts is robbed and two million dollars’ worth of paintings are stolen. Against the backdrop of these historic events, Dougherty discovers the body of a murdered young man on Mount Royal. As he tries to prove he has the stuff to become a detective, he is drawn into the world of American draft dodgers and deserters, class politics, and organized crime.

A Little More Free, the second Eddie Dougherty mystery, presents a portrait of a city and an officer trying to find out where they stand in a divisive and rapidly changing world.