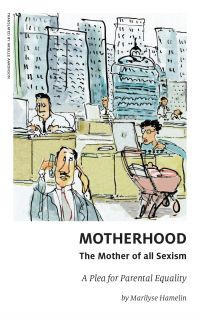 Motherhood, The Mother of All Sexism

Quebec spoils its families, according to some, with those “long” parental leaves—a full year for mothers (Imagine!)—well-subsidized childcare and more. Marilyse Hamelin challenges that restrictive view. But she adds that although progress has been made compared to other places in North America, stop-gap measures are not the answer. Women deserve and expect more. And the fight for women’s rights and equality is taking place here and now, in Canada and the US, and not in some distant Third World country.

Why can’t woman have it all? Why can’t the labour market and the entire infrastructure that sustains it be adapted to meet the needs of mothers—and fathers? What does that mean in practice? What are the causes of the lasting inequality between men and women? Why does our radar blank out women working at minimum wage or less?

With a Foreword by Toula Drimonis

Author: Marilyse Hamelin is an independent journalist, blogger and public speaker born in 1980. She is a regular contributor to leading French-language publications including Le Devoir, La Presse, L’actualité, La Gazette des femmes and Châtelaine. As a committed feminist, she is often invited by Radio-Canada and other media to discuss the burning issues concerning women’s rights. Motherhood, The Mother of All Sexism, published in French under the title Maternité, La face cachée du sexisme (Leméac, 2017) is her first book. Marilyse lives in Montreal.

“Journalist and blogger Hamelin’s debut on systemic gender inequality is a timely reminder that, despite decades of incremental changes, stereotypes and other significant barriers continue to plague women in the workplace…. a worthy contribution that rejects the notion that women’s equality has been achieved, while also proposing changes to reach that still elusive goal.” Publishers Weekly

”An admirable boldness infuses Marilyse Hamelin’s Motherhood, The Mother of All Sexism… Hamelin has done a great service.” Kerry Clare, Quill and Quire