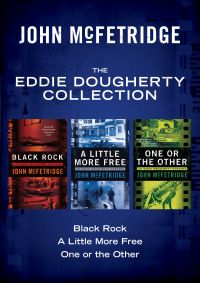 Read the mystery series Booklist called “brimming with historical verisimilitude . . . with a richly detailed protagonist and a seriously compelling mystery.” This collection includes all three novels in this gripping police procedural series.

Black Rock: Montreal 1970. The “Vampire Killer” has murdered three women and a fourth is missing. Bombs explode in the stock exchange, and riots break out, and the Canadian army moves onto the streets of Montreal. In the midst of this explosive era in Montreal history, a young beat cop finds himself almost alone hunting the serial killer, as the rest of the force focuses on the FLQ crisis. Constable Eddie Dougherty, the son of a French mother and an Irish-Canadian father, decides to take matters into his own hands to catch the killer before he strikes again.

A Little More Free: Labour Day weekend, 1972. Montreal is getting ready to host the first game in the legendary Summit Series between Canada and the USSR. Three men set fire to a nightclub and Constable Eddie Dougherty witnesses the deaths of 37 people. Against the backdrop of these historic events, Dougherty discovers the body of a murdered young man on Mount Royal. As he tries to prove he has the stuff to become a detective, he is drawn into the world of American draft dodgers and deserters, class politics, and organized crime.

One or the Other: In the weeks before hosting the 1976 Summer Olympics, the Montreal police are tightening security to prevent another catastrophe like the ’72 games in Munich. But it isn’t tight enough to stop nearly $3 million being stolen in a bold daytime Brink’s truck robbery. As the high-profile heist continues to baffle the police, Constable Eddie Dougherty gets a chance to prove his worth as a detective when he’s assigned to investigate the deaths of two teenagers. With tensions running high in the city and his future career at stake, Dougherty faces the limits of the police force and has to decide when justice is the only thing that should be obeyed.