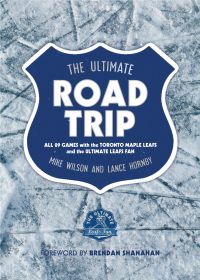 Mike Wilson, the man ESPN called the “Ultimate Leafs Fan,” attended every Leaf contest of the 2018–19 NHL season. With a foreword from club president Brendan Shanahan and colourful souvenir photos, The Ultimate Road Trip allows fans to vicariously experience the journey of a lifetime, and explores the passion of the sign-waving, fully costumed diehards who fill arenas from Alberta to Anaheim.

Who are these people? How did they get there? What motivates them to follow a franchise that hasn’t won a Stanley Cup in a half century?

Through 89 games, from October to April, the retired Bay Street trader explored all 31 rinks to document stories of Leafs love. Mike took every conceivable mode of transport, stayed in team hotels and on the couches of family and friends, then went into the cheap seats, private suites, the streets, sports bars, hotel lobbies, and many other unique locations where Leafs Nation gets together, to gather tales both hilarious and heart-wrenching. Media personalities, former players, and NHL celebrities gave Wilson their thoughts on what fuels the Leafs passion.