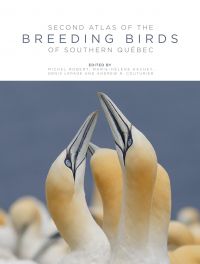 Second Atlas Of The Breeding Birds Of Southern Québec

The Second Atlas of the Breeding Birds of Southern Québec is the result of the largest ornithological project to be undertaken in Québec for a quarter of a century. From 2010 to 2014, hundreds of birdwatchers spent more than 100,000 hours scouring the different habitats of southern Québec, an effort that enabled them to collect half a million breeding records.

This book presents the most up-to-date information on the distribution and abundance of 253 bird species that breed south of latitude 50.5°N in Québec.

Beautifully illustrated with more than 450 photographs and 1,000 colour maps, this book incorporates the results of the first atlas (1984-1989), showing the changes that have taken place in our bird populations over the past quarter of a century.

The Second Atlas of the Breeding Birds of Southern Québec is intended for a wide audience. This solidly documented book

(more than 1,000 references) is a veritable mine of information, and is an essential for birdwatchers, students, researchers, conservation organizations, municipalities, consulting firms, promoters, and many more. It is a valuable tool that will inform and guide bird conservation projects in Québec over the coming decades.

The Second Atlas of the Breeding Birds of Southern Québec is jointly published by the Regroupement QuébecOiseaux, the Canadian Wildlife Service (Environment and Climate Change Canada) and Bird Studies

All profits from the sale of this new atlas will go into the Atlas Fund (Fonds Atlas), which is managed by the Regroupement QuébecOiseaux for the conservation of birds in Québec.